Greenbriar West Elementary School opened its doors to students for the first time on March 27, 1972. Our first principal, Donald S. Carroll, specifically waited to open our school until mid-year, after construction was fully complete, because he did not want children to have to endure the chaos of attending school in an unfinished building. 615 children were enrolled at Greenbriar West our first year. From September 1971 to March 1972, the students were housed separately at Brookfield, Centreville, Greenbriar East, and London Towne elementary schools. 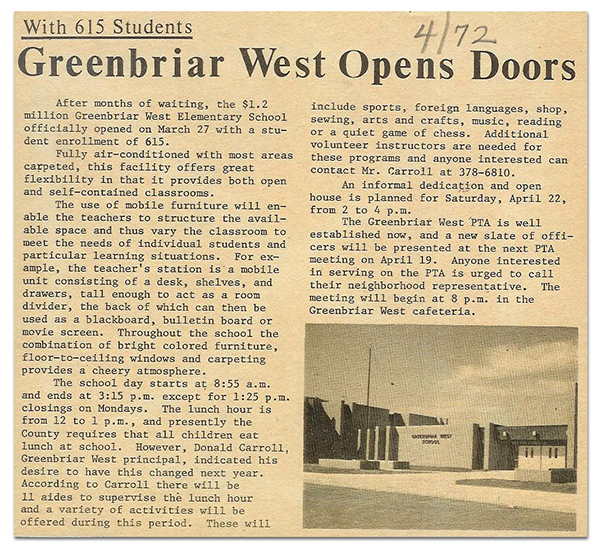 Planning for our school began in November 1967 when the Fairfax County School Board directed FCPS staff to adapt the plans for London Towne Elementary School, designed by the architecture firm of Beery & Rio, for use with “Greenbriar #2 Elementary School.” In December 1970, the Fairfax County School Board awarded the contract for the construction of our school to M. L. Whitlow, Inc. in the amount of $1,195,000. Greenbriar West was originally designed with an enrollment capacity of 780 students. Our building was more expensive to construct than other schools built in the county at that time because it required special soundproofing in the walls, ceiling, and windows due to our school’s location in the flight path to and from Dulles Airport. In April 1971, the School Board renamed the existing Greenbriar Elementary School as Greenbriar East, and officially named our school Greenbriar West.

A Tree is Known by the Fruit it Produces

This well-known proverb was our school’s first theme. Greenbriar West was originally designed as a partially “open-school.” The open-school educational philosophy was very popular among educators in the 1960s and 1970s, resulting in changes to teaching methods and the physical layout of school buildings. At Greenbriar West, students of different grades and age levels were clustered together in what our second principal, Robert Marshall, called "branches.” The branches were named for types of trees, such as Dogwood, Evergreen, Pine, Poplar, and Truffula (an imaginary tree featured in Dr. Seuss’ work The Lorax). Four of the branches were housed in the two-story classroom wing of the building and were clustered around the library. The Truffula branch was located in the hallway across from the gymnasium. Each branch originally had four teachers and about 120 students. 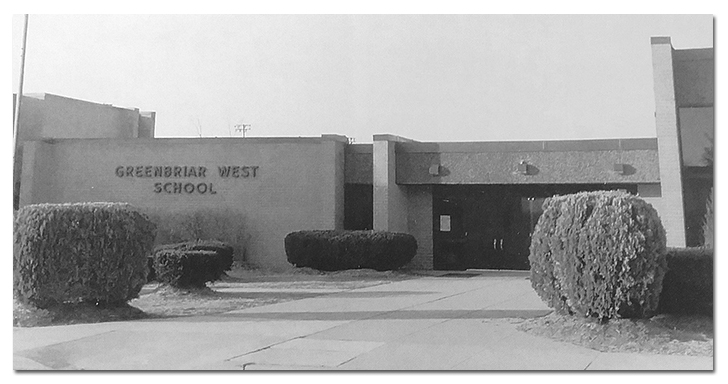 In April 1972, shortly after our school opened, the Chinese government donated the very first giant pandas to the Smithsonian’s National Zoo. Named Ling-Ling (a female) and Hsing-Hsing (a male), the pandas were immensely popular and drew millions of visitors from around the world to the National Zoo. In 1981, when Robert Holderbaum became principal of Greenbriar West, he was surprised to find that our school didn't have a school mascot or school colors. A contest was held to choose a mascot and the students, still enthralled with Ling-Ling and Hsing-Hsing, chose the panda. The small panda statue in our school courtyard was placed there following the completion of our most recent renovation (2005-07). The letters G, B, and W are from our original school sign that was replaced during that renovation. The small colorful stones around the panda statute represent baby chickens, or chicks, and are a reminder of a time when second graders used to learn about life cycles by hatching chicken eggs. 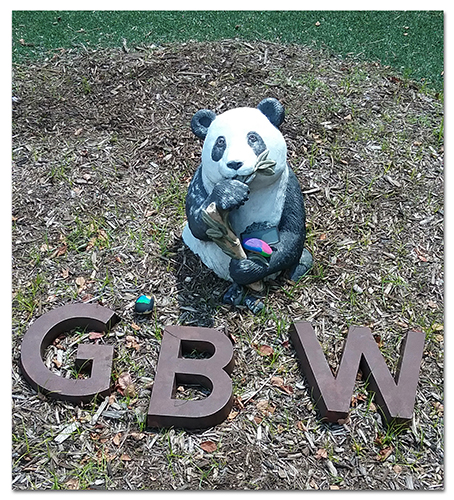 The 5 D’s of Discipline

When Principal Marshall came to Greenbriar West in 1978, he brought with him the motto “Kindness is Spoken Here.” Marshall also implemented the 5 D’s of Discipline. In the Greenbriar West Handbook from the 1979-80 school year, Marshall wrote:

We have rules and a code of conduct based on the 5 D’s. These are the guidelines for children’s behavior and the foundation for discipline at Greenbriar West. Essentially, a child may do that which is not disturbing, destructive, disrespectful, dishonest, or dangerous. These guidelines leave room for each child to do considerable thinking and decision-making in terms of specific behavior. A child may decide to run down the hall, but by doing so, he or she violates one of the 5 D’s. It is dangerous and the child knows that the consequence will be to “practice” walking back and forth ten times. He also knows that if he abuses a privilege, he will lose it, and that if he destroys property, he will restore it and be asked to work after school to compensate for the labor involved. Our goal is to provide a balance between adult supervision and student responsibility for self-control and self-discipline.

In 1978, Greenbriar West Elementary School was designated a Gifted and Talented Center (GT) for western Fairfax County. About 80 students, identified as gifted and talented, were sent to Greenbriar West from 15 different schools in Fairfax County. Today, GT Centers have been replaced by Advanced Academics Program (AAP) Centers. You can learn more about our school’s advanced academic services here.

In the 1980s, a compilation of student drawings, poems, and short stories was compiled annually and published in a volume called The Panda Press. Also during the 1980s, the student government sponsored a monthly school newspaper called The Panda Post. The newspaper featured articles written by classrooms reporters who covered classroom and school events. Copies of the paper were sold before the start of the school day and cost five cents each. The proceeds funded student government activities.

Flags of the World

During the 1980s, the cafeteria at our school was adorned with flags representing the country of origin of every child at Greenbriar West. Due to fire codes the flags were eventually taken down, but a photograph of some of the flags appears in one of our yearbooks. 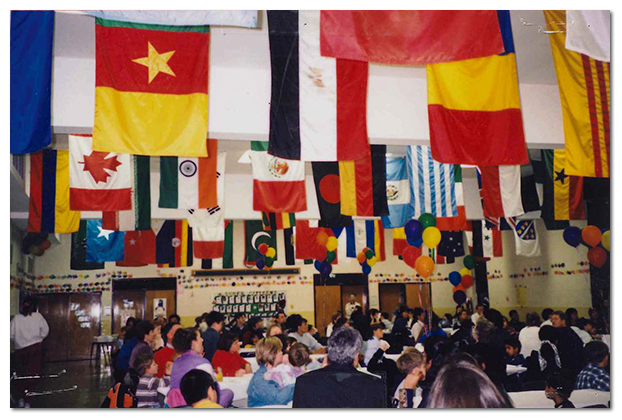 What's in a Name?

Learn about the origin of our school's name in this video produced for Fairfax County Public Schools’ cable television channel Red Apple 21.